Labor Day has come and gone, an occasion marked by some of us by enjoying a day off work, while for many others (mostly the same “essential workers” who have continued to step up during the entire “Pandemic Pause”), it was another day of work facing increased risk of infection, often at wages inadequate to support their families.

COVID-19 has taken a brutal toll on the people of Massachusetts, costing over 9,400 people their lives statewide, including 988 in the three counties of the Pioneer Valley (Franklin, Hampshire, and Hampden, totals as of 9/28/2020). In addition to the health impact of the pandemic, the economic impact has also been devastating. Nearly six months after initial steps were taken to shut down large portions of the economy in an effort to stop the pandemic from spreading like wildfire, there were still 334,200 people in Massachusetts collecting regular unemployment insurance as of the week ending September 9, including 31,473 claimants in the three counties of the Pioneer Valley. (By comparison, the 10-week average of claims prior to the shutdown was 66,167 statewide, and 7,355 in the Pioneer Valley). 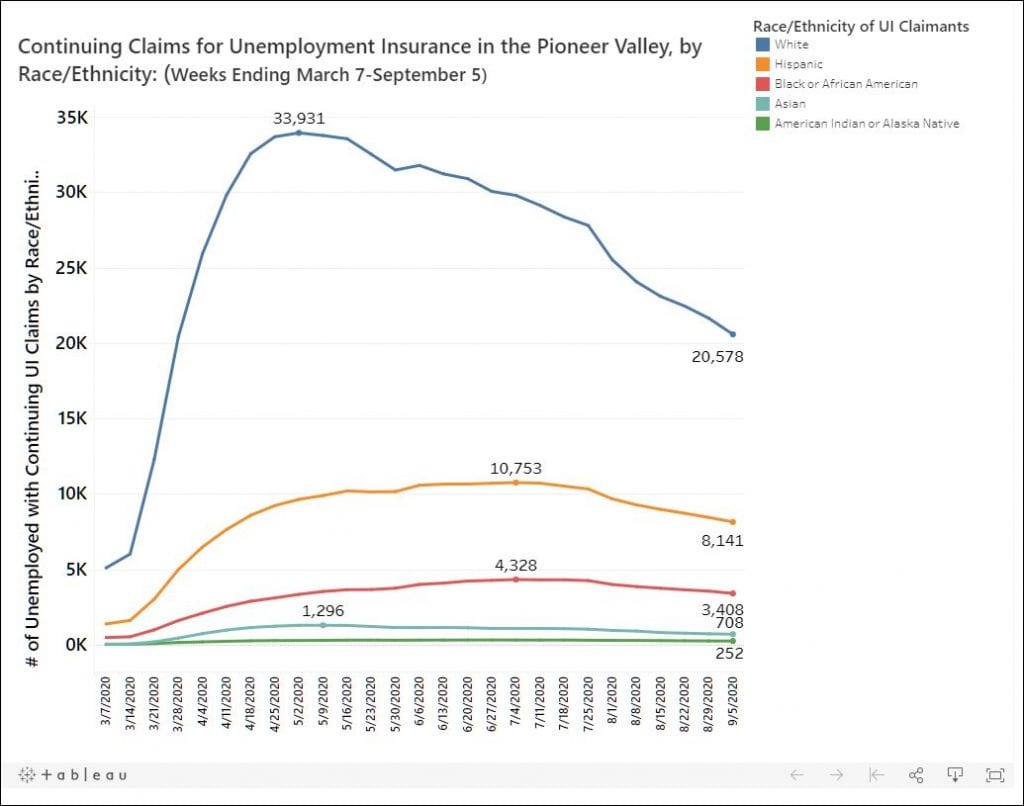 [Click through on image to see Tableau Public chart]

Black and Hispanic/Latino workers in the Pioneer Valley have been hit particularly hard by the pandemic’s double-fisted health and economic impacts, largely reflecting their disproportionate employment in sectors hardest hit by the shutdown. In the first two weeks of March, prior to the pandemic shutdown, Black and Hispanic/Latino workers accounted for 27% of the Pioneer Valley’s unemployed with continuing unemployment claims1. Since the third week of March, as the pandemic shut-down took root, the share of continuing unemployment claimants who were Black or Hispanic/Latino rose steadily, from 25% the week ending March 21 to 37% the first week of September. These trends suggest that the longer term impacts of the shut down will hit them harder (and are largely consistent with patterns we see nationally that show the COVID recession further exacerbating disparities in the labor force based on race and ethnicity).

We see this shift reflected in the accompanying figure, showing the number of continuing unemployment insurance claimants by race and ethnicity. By the week ending May 2, continuing claimants who were White or Asian had peaked (at 33,931 and 1,296, respectively), while the number of Black and Hispanic or Latino claimants continued to rise for two full months, peaking at 4,328 and 10,753 respectively the week ending July 4.

As the economy continues to slowly recover, efforts to help communities and families in the Pioneer Valley recover from the negative economic impact of the pandemic will be most successful if they are focused on those most in need.